The benefits of healthy, low-mercury fish like wild-caught Alaskan salmon are seemingly endless. However, it is often difficult to find fresh wild salmon at stores, and if you  do, you’re likely to shell out at least $20 for a portion large enough to feed two. Canned wild salmon is a great alternative – it’s available almost anywhere and sold for a very reasonable price. Unfortunately, it’s not as aesthetically appealing as it’s fresh counterpart (plus you have to venture to the dreaded “Canned Meat” section of the grocery store…**shudder**).

I’m not giving up on the potential of canned salmon to be worked into a delicious meal. I’ve had success working with it in a number of ways, plus I love the fact that its long shelf life means you can always have a can on hand for a quick meal in a pinch. For example, these Asian-inspired salmon cakes were born out of an evening where we had a bunch of random veggies in the fridge and not much else. I think they could be used in a number of meals, similar to how we’ve seen crab cakes treated nowadays (sandwiches, benedicts, salads, etc.)

Per usual, I didn’t do a great job of measuring, so feel free to play it by ear and adjust the quantities of herbs as you see fit. 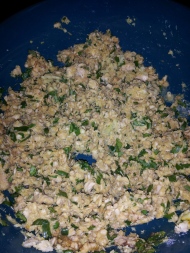 Beat two eggs in large bowl. Drain salmon and remove bones/skin if necessary. Add salmon, onions, cilantro, ginger, garlic, seasonings and flour to eggs. Mix well until evenly distributed and form into small patties (this recipe yielded 6 for me). If patties are too crumbly (i.e., not sticking together), add a little oil until a moister consistency is reached.

Heat oil in large skillet over medium high until hot. Place patties in pan and top with tamari/soy and juice of 1/2 of the lime. (NOTE: don’t go overboard on the tamari or soy – I have done this to try to rush the cooking process and ended up with very salty cakes…not good!). Let cook for about 5 minutes, or until bottom of cakes are golden brown. Flip cakes and add more oil to the pan as needed. Top again with a bit of tamari/soy and the juice of the other half of lime. Once other side is golden brown, the cakes are ready.

I served these with a quick stir fry of bagged veggies and a surprisingly delicious Americanized Japanese salad (recipe to come).

What’s Not in It